The TV host, Jones is 29 years old as of February 2022. He was born on December 10, 1992, in Texas, United States. The Fox & Friends reporter celebrates his birthday on the 10th of December each passing year.

The TV host, Jones was born in Texas, the U.S.A to his parents; his father Lawrence Jones II, and his mother Tameria. The Fox News contributor is very close to his mother. He occasionally shares his mother’s photos on his Instagram account. 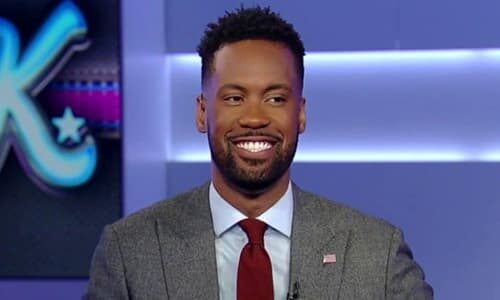 As of February 2022, Jones is not yet married and it’s unclear if he is still dating Sydney.

Jones attended the University of North Texas where he studied political science and criminal justice. He went to Garland High School where he graduated in 2011. Jones revealed that he served as “youth mayor” of Garland, Texas in 2009.

Jones is a frequent co-host for Outnumbered and guest host for The Five, as well as a correspondent for Hannity. He also regularly shares commentary on Fox Business, CNN, BBC, Sky News, and MSNBC.

Prior to joining Fox News, Lawrence was the Editor-In-Chief at Campus Reform, he also previously hosted his own radio show on TheBlaze Radio Network and served as a Contributing Host for TheBlaze TV.

Jones considers himself to be a Libertarian.

Jones has an estimated net worth of $2 million (net worth as of February 2022). He has amassed his fortune through his carer as a television and radio host. He is currently (2022) serving as a Fox News contributor and the host of The Lawrence Jones Cross Country.